At the One Year Mark, Tariffs Still Bite – Steven Rattner

With a large number of people expecting an economic downturn sometime in the next year it’s important that we keep an eye on global markets. Places like Oklahoma won’t be affect as severely when crashes happen, but we will be affected. There are people who would disagree with Mr. Rattner, but I tend to agree with him, and I think it’s worth sharing this information to my clients/friends. Rattner was the Car Czar during the auto-bailout, and he’s been in the trenches. I happen to appreciate him a little extra due to his focus on trimming the debt – he’s very involved with the group Fix The Debt, and if you are interested in geo/national economics that is one corner of the ring that would be worth keeping an eye on. I hope you get something out of this article.

On MSNBC’s Morning Joe today, Steven Rattner presented charts showing the failure of Trump’s tariffs to shrink the trade deficit with China while at the same time inflicting substantial pain on American farmers and other targeted sectors.

President Trump is pushing hard for a trade deal with China and it’s not hard to see why: his trade war is not going well. Last week, the government reported that the United States’ trade deficit (in goods) hit a record $891 billion last year, as imports grew faster than exports. 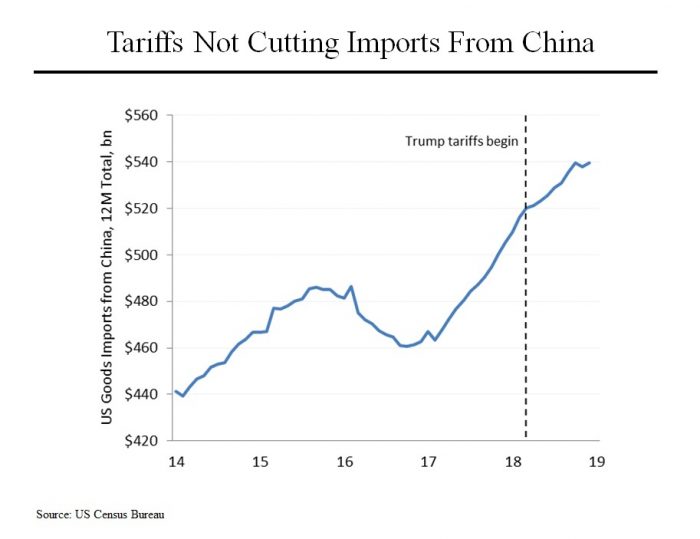 With imports rising and American exports to China falling, our trade deficit (in goods) with China rose last year to $419 billion, 24% above where it was just a year earlier.

Contrary to what Mr. Trump says, his tariffs are not paid by China; they are paid by American companies and consumers in the form of higher prices. 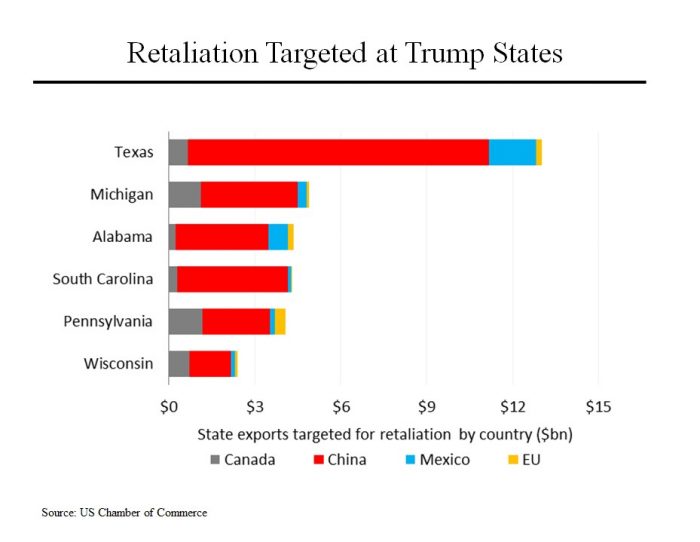 Part of the rising trade deficit results from retaliatory tariffs that China has imposed on exports from the United States. Indeed, Chinese exports from the United States declined 7.4% last year. China has been extremely clever about targeting its own tariffs to items that are disproportionately exported from “red states” that Mr. Trump carried in 2016. Texas faces tariffs on its exports of propane, sorghum and cotton. For Michigan, Alabama and South Carolina, the issue is autos. (Smaller retaliatory tariffs have been imposed by Mexico, Canada and the European Union). 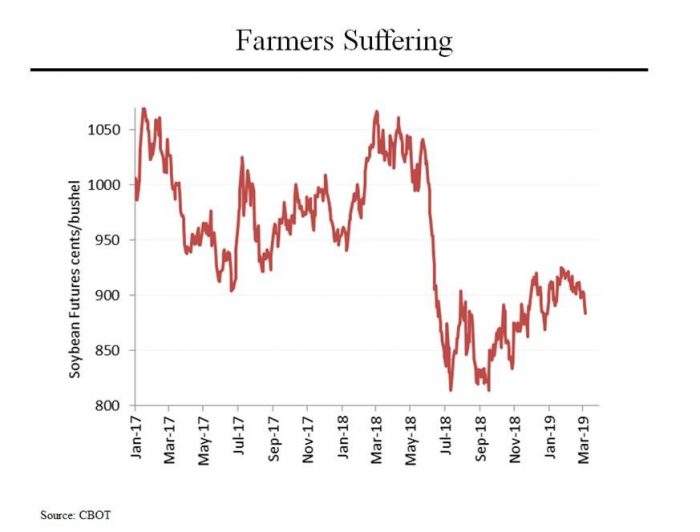 China has also taken aim at American exports of soybeans; before it imposed a 25% tariff on imports from us, China purchased about one-third of our entire soybean crop. As this chart shows, soybean prices collapsed last spring as rumors of the Chinese action began to circulate and the country began to dramatically scale back its purchases. Perhaps not surprisingly, Mr. Trump won eight of the 10 states that are the biggest producers of soybeans. Another way to look at it: soybean-producing counties went for Mr. Trump by a margin of more than 12 percentage points.

While soybean prices have recovered somewhat from their lows, even if China resumes its purchases, it may be a good while before prices fully recover; soybean stockpiles in the United States are currently about twice their historic average.